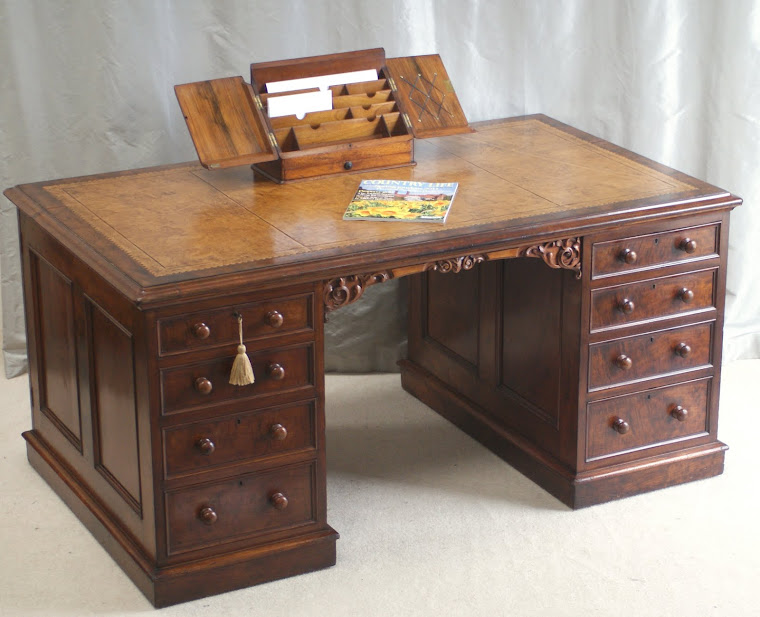 This page shows photographs both "before" and "after" restoration.  All restoration is done by the highest quailified restoration professionals using the very best materials.  Wherever possible we aim to retain as much of the original fabric and charater of the desk as possible.  Renovation or installation of leather writing surfaces is one of our specialisations.  This can include embossing and gilding in a owde variety of designs to truely personalise the desk.  See more at  http://www.antiquedesks.net/links/Antique-Desk-Restoration.html
Posted by David Lawrence at 15:12
Email ThisBlogThis!Share to TwitterShare to FacebookShare to Pinterest

The firm of Gillows of Lancaster can be traced back to Robert Gillow (1704-72) During the 1730's he began to exploit the lucrative West Indies trade exporting mahogany furniture and importing rum and sugar. Following his death in 1772, the business was continued by his two sons, Richard (1734-1811) and Robert (1745-93). In 1764 a London branch of Gillows was established at 176 Oxford Road, now Oxford Street, by Thomas Gillow and William Taylor. The firm rapidly established a reputation for supplying high quality furniture to the richest families in the country

During the final years of the 19th century the company ran into financial difficulty and from 1897 began a loose financial arrangement with Waring of Liverpool, an arrangement legally ratified by the establishment of Waring and Gillow in 1903.

Gillows marks and stamps: makers numbers were stamped on the pieces of furniture when they did not form part of a special order. The letter L placed before the number indicates that the piece was manufactured at the Lancaster factory. The stamp GILLOWS LANCASTER first appeared on furniture between 1780 and 1790. By the middle of the 19th Century GILLOW is found stamped on pieces in 2.5mm letters. By the end of the 19th Century GILLOW & Co is often found, lightly impressed in letters 3mm high. Waring and Gillow instituted a thin stamped brass name plate, a practice that was continued up to the 1950's. Marks are generally found on the top edges of drawers, on the underside of lids or table tops, on the right hand back leg of early chairs and under the front edge of the seat of later chairs. Very often the pencilled signature of the craftsman making the piece can be found on the underside of a drawer.
. 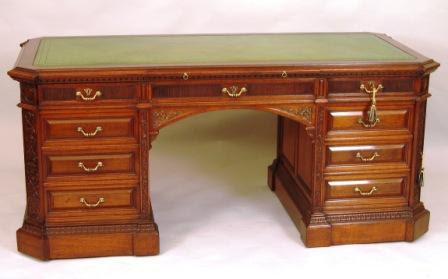 A fine and rare 67" (170cm) Walnut Twin Pedestal Partners Desk by Gillows - fully authenticated and catalogued - made in 1882 to special order for a named Client.